Song of Pueblo at Washington Underground Theater in Walsenburg 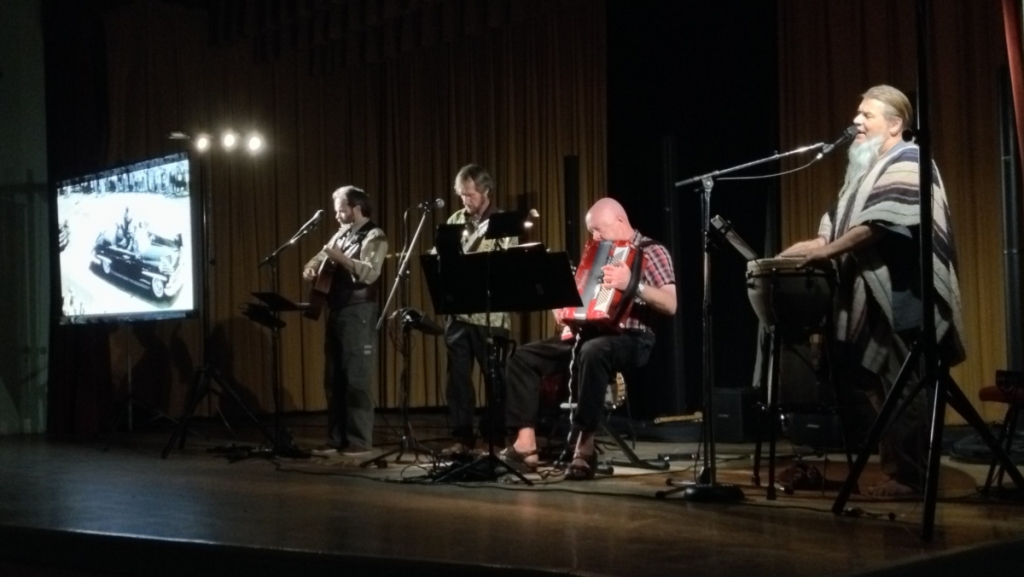 WALSENBURG — Washington Underground Theater was filled with beautiful music, if not people, on Friday evening for the production Song of Pueblo.

About 40 fortunate folks enjoyed the 16 ballads accompanied by photos, art, and maps projected onto a screen depicting the history of southern Colorado.

El Pueblo, along the banks of the Arkansas River, was the early settlement that became the City of Pueblo. The word pueblo can be used to mean “people” so Pueblo is “the people’s town” as the song refrain reminds listeners. The songs and music, written by Daniel Valdez after many years of research, reflect the traditional songs of the many ethnic groups that have come to this area and left their mark. The music was perfectly performed by four musicians and singers: Tom Munch, Johnny Watson, David Enke and Alan Polivka.

The Song of Pueblo, could really be renamed the Song of Southern Colorado because the songs and narrative begins with the battle of Cuerno Verde, progresses through tragedies and massacres at El Pueblo, Sand Creek, and Ludlow and then touches on more peaceful events like the love of a man for a certain woman and the cowboy culture of the Goodnight cattle drives.

The Song of Pueblo was brought to Walsenburg as a fund raiser for improvements at Washington Underground. A silent auction with many donated gifts were bid on by attendees. District ONE provided light refreshments before and after the show.

The theater at Washington Underground, which seats about 400 people, has great acoustics. The celtic festival hosted concerts there last September and proved to be a hit with musicians and concert goers alike.

The City of Pueblo and the entire SoCo region has a fascinating, colorful, and ethnically diverse history which the Song of Pueblo presents wonderfully.

Paulette Laster Stuart and Deborah Espinosa of History Colorado were instrumental in getting the production funded and produced in 2008, and it is still going strong. The oratorio was produced to educate as well as entertain. The music of the Song of Pueblo is available on CD. For more information about the production visit: songofpueblo.org.