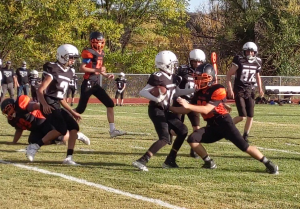 by Ruth Stodghill
PRIMERO — In a busy week of middle school football play, the Primero Bulldogs battled against Sierra Grande at home on October 20, earning their second straight win of the season with a final score of 44-26. This was followed by another win versus the Hanover Hornets in Colorado Springs on Saturday, October 24, with a final score of 52-12.

“Sierra Grande has strong and physical athletics; their middle school team proved they continue to be a TOUGH community. It’s always a battle playing them,” said Primero Athletic Director and coach Jose Esquivias. “Primero played hard from the start, and had a two-digit score going into the half.”

Esquivias has worked with the team for three years; the consistent training has resulted in exceptional leadership from the team’s eighth graders. “Brett Kendall flourished versus Sierra Grande. This eighth grade class has been working for this year. They got beat up as sixth graders, competed as seventh graders, and are now flourishing as eight graders. It was great football for Primero,” said Esquivias.

“Jairo Dominguez and Brett Kendall have shown complete ownership of their football team,” Esquivias said. “It has been an outstanding reward for those boys to come out and play with confidence and see their years of work played off. Brett Kendall can electrify his teammates, the audience, and the entire community with the way he is playing this year.”

The Bulldogs extended their winning streak versus the Hanover Hornets on October 24, travelling for over two hours to take on their opponents. “We packed lunches, and played an in and out game,” Esquivias said. “Hanover has a very experienced coach, and plays sound football with a continuous rotation.”

“A core amount of their players are young, but they had a few eighth graders who kept snagging the ball and getting first downs. Thankfully, we have impact players from our seventh and eighth grades. This week, Gabe Sintas shined as a seventh grader with catching and throwing touchdowns,” said Esquivias.

“While some schools are having to write off sports right now during this challenging time, it is great to see Primero use its resources to ensure the students get an opportunity to achieve, even if it means driving over two hours to showcase their talents.”

The Bulldogs play their final home game against Branson/Kim at Primero on October 28 at 6 p.m.

Wins over 20 awards at the annual Colorado Press Association convention, including General Excellence for the second year in a row World Journal Staff Report

Optimistic plan, fuelled by up to $900,000 from state, could see 2023 reopening by Mark Craddock  WALSENBURG — Area children could be spending their summer