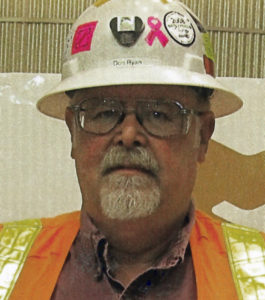 Don’s strong work ethic and dependability formed at an early age.  He grew up on and eventually worked on ranches in Colorado.  After graduating from La Veta High School in 1973, he enlisted in the US Navy.  Don was stationed aboard the USS Constellation CV-64 / Interior Communications (Electrician).  After his tour-of-duty, he earned a Bachelor of Science Degree, in geology, from Fort Lewis College, Durango, Colorado.

He worked as a geologist for several mining companies, including: Standard Metals, Sunnyside Mine, Silverton, Colorado; Sunshine Precious Metals, Trixie Mine, Eureka, Utah; Sunshine Mining, 16-to-1, Mary/Drinkwater properties Silver Peak, Nevada; and Echo Bay Alaska. Don was working at Echo Bay, McCoy Cove Mines, Battle Mountain, Nevada until the property closed.  He then earned an electrical technology degree from Great Basin College, Nevada.  In 2006, he was hired by Barrick (Nevada Gold Mines), Cortez Mine where he worked for about 14 years until he retired as a Senior Geologist.

Don genuinely enjoyed reading.  He was never far from a book, newspaper, magazine, or   his tablet.  He also looked forward to walks with the dogs.

Don’s Celebration of Life will take place in La Veta, Colorado, a place he called home, on June 14, 12:30 at the La Veta Community Center.