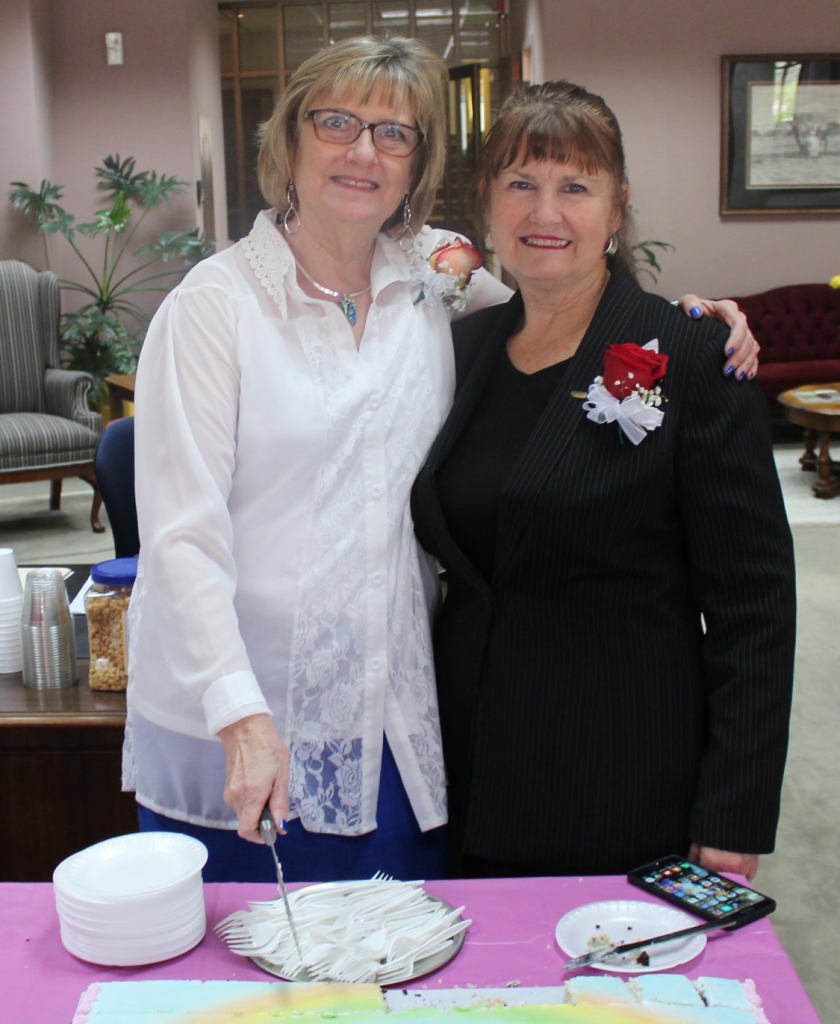 RATON — On Tuesday, May 31, 2016, International Bank hosted a reception to honor two of their retirees. Jeannie Meek Barnes and Terri Segotta closed a tear jerking chapter in their lives as bank officials. Although both women were in the bank’s service for almost the same length of time, they are remembered each for their remarkable and unique contributions.

Terri Segotta spent the last 13 years happily serving International Bank’s customers. She moved to Raton in 1978 and worked at Kmart managing soft lines. The position required her to be assigned to Albuquerque, and after a total of 13 years, she left Kmart and moved back to Raton, the tranquil town that captured her heart. She married Neil Segotta, who presently serves as City Commissioner of Raton, and International Bank proposed an enticing banking career to her.

First being assigned to the task of Loan Assistant, Segotta quickly moved to Customer Service and then to juggle the portfolios of Head of Internet Banking (Personal and Business) and Head of Merchant Services. These two positions handled the day to day operations of the bank’s seven branches. Despite her job demands, Segotta always found time for community involvement. She sat on the board of Raton’s Arts & Humanities Society, Raton Housing Authority and was both President and Vice President of Raton Ambassadors. She has been and continues to be active in her church community at the First Baptist Church.

Segotta reminisced about her first day at International Bank when a co-worker and now close friend, Wendy Griffin asked her “Are you scared?” and she responded “I wasn’t until you asked me.” For her, it is memories like these, the many friends she made with her co-workers as well as her customers who she didn’t get to say goodbye to that she will miss the most. When asked what her plans are for retirement, Segotta contentedly responds “It’s time to take time for me for the first time in 45 years.” With her son in Albuquerque and step children in Colorado Springs and Illinois, she looks forward to spending more time with them as well as strengthening her support system for her husband as he continues his work as City Commissioner and Director of Colfax County’s Senior Citizens’ Centers.

Jeannie Barnes brought a tear to many eyes at International Bank as she left to embark upon her retirement adventure. Barnes joined the bank 14 years ago, and having worked at Bank of America for eight years prior, she was equipped with previous banking experience. The position of Vice President and Human Resource Director was both challenging and rewarding for Barnes.

Spearheading many of the bank’s community sponsorships and initiatives, Barnes enjoyed being involved in the Colfax County Fair for 15 years. Whether it was organizing a stick horse race for kids, judging at the fair and show or helping with the local, state or national Fair Queens, Barnes could always be found every year with eyes lit up with excitement and encouragement.

Raton benefitted from Barnes’ input as Hostess at First Baptist Church, President of Raton Ambassadors and cast member of Shuler Theatre productions Annie Get Your Gun and Hello Dolly. She was also recognized by Raton’s Professional Business Women in 2012 as a nominee for their Woman of the Year award. Barnes is looking forward to travelling between Taos, Oklahoma and Kansas to spend time with her three children and five grandchildren.

Between the tears and the laughter, she acknowledges how much she will miss her International Bank family.

by Mark Craddock LA VETA — At its Feb. 6 meeting, the La Veta RE-2 School Board will take up the issue of its athletic