Will Overhead, and the typo heard round the world 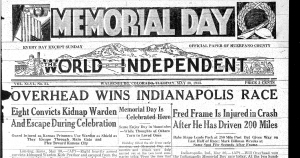 by Nancy Christofferson
WALSENBURG- All of us suffer from some degree of “foot in the mouth-itis”, but imagine having a case so severe it lasts 78 years! Such was the case that infected an unnamed reporter for the Walsenburg World-Independent. The case was so severe, in fact, that at the recent annual meeting of the Colorado Press Association, that august body not only remembered the mistake but hailed it as one of the most embarrassing ever to hit a newspaper. It now serves as an example, albeit, an example of what not to do.

The mistake used to be fairly well known in this area. It was the famous headline of May 30, 1933, “Overhead Wins Indianapolis Race.” The headline was followed by three brief paragraphs, but their content resonates yet. The first paragraph was the killer, “Will Overhead won the Indianapolis Memorial Day race today. At the 250 mile post Babe Stapp was leading the string of roaring cars, but gave way to Overhead on the last half of the 500 mile grind.”

Well, Will Overhead did not win the Indianapolis 500 in 1933. A simple glance at the World Almanac shows us Louis Meyer captured that honor.

The problem can be traced to a simple error probably made by a rookie typesetter. It’s easy to visualize – a holiday weekend, the bosses off enjoying warm weather and a picnic with the family, perhaps, but certainly far from the office. His instructions for learning the results of the race would have been to refer to what was called a pony wire, used instead of teletype at the time, that resembled today’s conference call. When he spoke with the Associated Press on its pony wire about midway through the race, he heard the words “Will Overhead.” This obscure term meant the results were not yet known, and would be sent along when available. The AP thought it was telling the typesetter it would telegraph the winner’s name when the race was finally over, but our rookie did not know that, and thought one Will Overhead was the winner of the race.

One honest mistake, and one makes history. Of course, it wasn’t our rookie who went into the newspaper annals, but Will Overhead, the auto racer who never was.

The editor of the paper at the time was a John J. Fitzpatrick, himself just a few months on the job, and the sports editor was Tom Solomon, who remained with the newspaper for some 30 years. Evidently neither of these men was willing to take on the burden of admitting the mistake, so it was never mentioned. No correction was ever printed, no apology. There may be some deluded souls out in the hinterlands of Huerfano County who still think Will Overhead won the 1933 Indianapolis 500.

However, in 1948, the World-Independent referred to the faux pas, just calling it a blunder made in 1933. The crux of that item, though, was that Walsenburg finally made its peace with the annual race with the entering of seven cars made by native son Tony Colnar, himself a former W-I employee then living in Glendale, California (his race car results are unknown: will overhead).

For some obscure reason, the Huerfano County Chamber of Commerce seized upon the Overhead error as an entertaining bit of nonsense just screaming to be perpetuated, and started Will Overhead Day in 1984. It was not on Memorial Day, nor even during the holiday weekend but on June 16. Mr. Overhead was remembered by staging sporting contests, though bike and foot races and horseshoes replaced the auto race, a pancake breakfast, a pet parade and a regular one, an art show, a barbeque and numerous vendor booths.

This proved much more successful than Overhead’s driving skills, and the following year’s event drew some 5,000 participants. The first event had overflowed the city, so the second was held downtown and in Lathrop State Park, with some 25 concessions, games and booths of local organizations, and sports. The 77th Armored Division from Fort Carson appeared, as well as the fort’s marching band. There was a golf tournament in conjunction, and no less than 65 entries joined the parade.

In 1985 the chamber was on a roll, and added music, a rodeo and a dance, and even stretched out the celebration to three days.

Congratulating themselves, chamber members in 1986 again lengthened the event, having a “pre-Will Overhead Day” dance in the Walsenburg Community Center with music by The Roids. The golf tournament now offered $500 to the winner.

A queen contest was inaugurated in 1987, with Alicia Samuels named Miss Teen Queen, and Kelli Kreutzer and Tara Lowry serving as her attendants.

The new feature for 1988 was a shopping cart race down Main Street. There also were a carnival, parade and concession booths. Michelle Montoya was queen, Shelly Neighbor and Bernadette Valdez were attendants.

And that was that. In 1989 the chamber decided to resurrect the old Spanish Peaks Fiesta, and be done with that Will Overhead nonsense. Still, it was not a bad run for someone who was nonexistent. It is a puzzle, however, how a person who never lived, lives on. It’s a strange world.