WALSENBURG — On March 13, 1925, the Walsenburg Auto Dealers Association was founded. You ask, what, all three of them? Fact of the matter was, there were quite a few agencies selling new cars, and even more selling used vehicles.

Tom Young was elected president of that first association. Young Motor Company was started by Robert Young Sr. back in 1915, and he was quickly joined by his sons Robert Jr. and Dave. Sons William and Tom then came into the business, in 1916 and 1919, respectively. The company was known as Young and Sons. It was first a repair garage beginning in 1912 but became the official Maxwell agency in 1916. As a garage, it was quite the spot, evidently, being the only garage in Huerfano County “heated by hot air”.

Hot air just wasn’t enough, however, and the Youngs decided in 1919 to erect a 60 by 110 foot building to replace their old brick one. About that time the Youngs became the Dodge dealership and were honored in 1961 as one of the oldest Dodge dealers in Colorado. In that late year, the family sold their dealership, as well as their building at 221 Main, and the latter became a bowling alley, Crown Lanes. The Youngs also dealt in the Graham line of vehicles, and sold what may have been the first school bus in Huerfano County in 1924. The Walsen/Cameron school district purchased it, and it could seat 30. 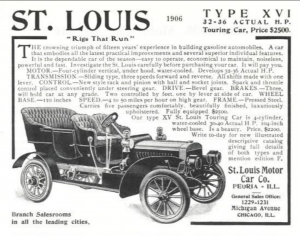 The Youngs were not the first dealers in Walsenburg. That honor goes to one R.E. Peerce, who opened an “auto” garage in 1908 and began dealing in sales as well. There were perhaps a dozen car owners in Walsenburg at the time (Fred Walsen the younger was said to have been the first) but tourists were filling the [despicable] roads by then. An example was the man from Dallas who “passed through town in a 35-horse power St. Louis Motor Car automobile” in September 1907. He no doubt drew a crowd.

In fact, cars were still so rare in those days, the newspaper took to regaling its readers with the new additions to the city streets. A passing comment in 1909 was the fact young Will Dick had a new auto, and “How many new friends he will have.” In 1910, George Fruth, a coal mine owner and rancher, bought a “fine new 40-horse power, seven-seater Chalmers-Detroit”.   In August 1911,
the paper itself ran a contest in which the prize was to be a $900 1912 Howard Roadster. In the same month, Rev. Lefevre was injured when a car frightened his team. 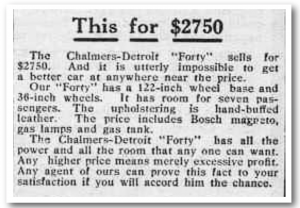 The Furphy family began dealing with cars in the late teens. John Furphy, a former coal mine superintendent, bought an undertaking parlor in 1903 and relocated it to 4th and Main streets in the former Presbyterian Church. He bought a livery stable next door, The Palace, and several of his 11 sons joined him in the business. In 1917 the boys must have seen the dawn of the auto age and offered their “horses, mules, wagons and harness” for sale. They opened a garage and car hire business. The advertising was a bit disconcerting – “Furphy Brothers Undertaking Parlors and Auto Livery”. Hopefully, the one did not necessarily follow the other.  In 1921 the Furphys built a new garage which burned the following year, destroying three cars and scorching their hearse. In 1922 they were selling Star cars, and Durants.

The long-lived Lenzini Motor Company was established in 1919 by Albert Lenzini Sr. It too began as a small garage and took on dealerships as it grew. Through the years, Lenzinis handled Hudson, Essex, Pontiac, Buick,Chevrolet and Oldsmobile lines. A 1922 ad offered their Hudson Super Six sport model for $1,885 and in 1970 they had the new model Vega 2300-4 cylinder for not much more. They built a new garage in 1922, and a whopping big showroom and garage addition in 1928. They sold auto supplies as well from this building until it burned down in 1939. They rebuilt, and 1,000s, according to the Walsenburg World-Independent, attended the grand opening. This building still stands at 1018 W. 7th Street. Lenzinis also operated tire shops, five filling stations, including one in Gardner, and auto supply stores.

James W. and Everett L. Sears, cousins, came to Walsenburg in 1915 when there were said to be 60 cars in the entire county. Still, they figured they could repair them, and opened a repair shop. By 1918 they were selling “Fordson” tractors and other farm equipment. That year they bought the property at 4th and Main streets, tore down an old building and put up their “modern” garage. In 1919 they installed an 11,000 gallon gasoline tank on the south side of their building. The tank could be filled directly from the railroad tankers that supplied it. By 1933 they had built a “super service station”, as these things were then called for their attention to the needs of the motorist, had razed three small buildings to their north and added a showroom. They sold Pontiacs and Texaco products, the latter replacing their Bowser gasoline franchise of 1921. J.W. was elected Walsenburg’s mayor in 1921.

Mike Reviglio went into the car repair business in the teens, having arrived in 1910 from his native Italy, and got the Studebaker agency in 1919. Mike had many partners at several locations and operated under many business names, but kept his Studebakers until his retirement in 1949. He had started his Standard Motor Company in 1916 at 710 Main, the former site of Walsenburg’s first Masonic Hall. He also was connected with the old Central Garage of the 1920s, and last partnered with Albert Barbacovi at 2nd and Main in the late 1940s.