by Ruth Stodghill
TRINIDAD — The Trinidad School District held a work session on Wednesday, June 8 to discuss phase two of the “One Campus” consolidation plan. 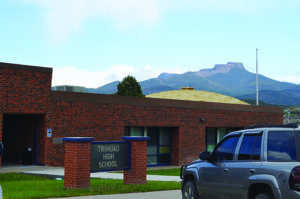 Phase one is currently underway, with the high school moving the majority of its classes to the middle school buildings this summer. Phase two involves relocating elementary students from Fishers Peak to the Trinidad High School A Building.

Facilities director Jeff Roybal shared that previously planned renovations are already underway in the A Building, with work being done to replace light fixtures. The replacement of air conditioning and boilers in the gym won’t begin until next summer due to a lack of materials and labor.
Roybal reported that an outside company is contracted for June 21 to move any high school classrooms that are packed and ready to go into the middle school, with administration teams moving in July. The cost to book the moving company for two days is $10,000. Roybal hopes to curb this cost by utilizing the moving company for only one day and finishing the move with school district facilities staff.

New ADA compliance issues
Roybal stated that while the THS A Building met all ADA requirements when it was built, due to its age and changing standards, it would be considered out of compliance if it were new construction.
Board member Ed Romero asked Roybal if the district would be able to move the elementary students into the high school building, given the compliance issues. Roybal expressed doubts, stating that the building will lose its ‘grandfathered in’ ADA compliance if it is vacant for a year, which is the current consolidation transition plan. Expensive renovations will be required to bring items like ramps and bathrooms into compliance.

Renovations required to move elementary kids into high school
Romero asked Roybal if anyone has done a walk through of the high school building to see what renovations need to be done to accommodate elementary students. “No, we have not,” Roybal said. Romero directed Roybal to begin the process by hiring an architect, stating that the school district needed to determine the cost of phase two of consolidation.

“It’s not going to be cheap,” said Roybal.

Renovations that need to be looked at include classrooms, bathrooms, playground equipment, fencing, and security systems such as cameras and a key card system.

Traffic flow difficulties
District School Resource Officer Nick Mattorano said that he met with city officials for several hours this week regarding the expected traffic flow for when the elementary transitions to the high school building. “It is going to be a mess, no matter what we do,” said Mattorano. He stated that due to the limited number of access points to the campus and the high volume of traffic, snarls are inevitable. “The drop-off line at Fishers Peak in the morning is already almost three-quarters of a mile long.”
Mattorano explained the difficulties of accommodating such a large number of vehicles at the THS campus. “We can’t back up traffic along Robinson Street because that’s part of Highway 12, and we will receive calls from C-DOT,” said Mattorano. He then discussed the problems associated with other access points to the school.

“San Juan Street is already a major thoroughfare in the mornings,” he said. “Willow Street is narrow. And there’s a huge hill on Prospect that is going to be nasty in the winter.”
“I look at it from a law enforcement background too, and there may not be a good answer,” said board member Jim Casias.

Following the work session, the board held a brief special meeting to approve a short list of action items.

The board passed resolutions that included the acceptance of several staff resignations at Trinidad High School, including longtime science teacher Zeb Williamson. Williamson spoke out about the lack of transparency between the TSD1 school board and teaching staff regarding consolidation plans at the June 2 school board meeting.

The board also approved the appointment of Jeff Roybal as THS head football coach, and appointed James Sanchez to the district’s safety committee.

While the board set another work session for June 22 at 5:15 p.m. prior to the regular board meeting at 6 p.m., in the interim, in light of the difficulties and issues that have come to light, the district scheduled a special meeting, specifically to vote again on the consolidation question.