1889: Alex Levy put water service into his large store this week. 1895: The 4th of July celebration in Walsenburg will begin with a 13 gun salute at 6 a.m.

1902: Luz Zubia, who served under Kit Carson in Company C, New Mexico Volunteers, is now receiving a $12.00 a month pension. A native of Mexico, he quit college and became a tailor. After living in Texas, Arizona and California, he worked for Colonel Francisco in Huerfano County. He settled in Texacita, a plaza south of the Cucharas Creek and Walsen Camp, then at Turkey Creek before moving to his present home in North Veta.

1908: Mr. and Mrs. George Ingraham of Gardner went to La Veta and contracted with the Robinson Brothers cement block factory for materials for their new home.

1920: A sane Fourth of July will be in order at the Mesa Schoolhouse, 13 miles southeast of Walsenburg, where a big dinner, games and patriotic exercises will be offered.

1927: Boys from Huerfano County will go to the Colorado Fuel and Iron Company camp for a 10-day stay to learn first aid and enjoy outdoor exercises from June 26 to July 7. The girls go from July 7-17. Cost per camper is $5.00.

1932: A goodly number of young boys gathered at the flag station at the west end of Seventh Street early yesterday for a hiking trip four miles up Bear Creek above Cameron where they played games and sports.

1938: Archie Morehouse is the organizer of a new six piece band to be known as Art Foote and His Orchestra.

1944: High winds over the Walsenburg reservoirs have turned the water cloudy but it is believed it is not harmful …

1949: Loco weed, the old time livestock hazard, is bobbing up again in Huerfano County but can be controlled with the modern day miracle, 2,4-D spray.

1954: With the completion of State Highway 10, a traffic signal light may be placed at Fifth and Main streets to do away with the bottleneck that backs up traffic.

1960: The temperature in Walsenburg spurted into the 90s the past week with the maximum being 95 on Friday, with a low of 44 early Wednesday morning.

1966: The local Slovene Lodge will mark its 50th anniversary Sunday, June 26, with speakers, lunch and a dance in the Walsenburg Pavilion. Founded as No. 299 Slovene National Benefit Society, or SNPJ, in 1906, John Lepich remains as the only charter member.

1972: The Huerfano County Chamber of Commerce Sidewalk Sale July 1 in Walsenburg will kick off the Fourth of July celebration along with the Main Street parade, featuring Firecracker Queen Cherie Santi and her attendants Pam Vialpando and Marla Martinez.

1978: In an attempt to equalize salaries of city and utility employees, Walsenburg City Council has approved raises in salaries of all municipal workers an average of 15.8 percent, and in the police department, patrolmen will go from $599 to $700 per month.

1896: It has been stated that parties racing their horses on the town streets, practicing for the Fourth of July races we presume, will be arrested, so look out, boys.

1901: The Presbyterians of this vicinity indulged in a picnic up the Wahatoya last Thursday.

1907: The Denver and Rio Grande company has laid a good plank sidewalk from Ryus Avenue down to the track. The company should remove the old fence, what’s left of it, from around the park.

1912: Heavy frost killed off all the vegetables, fruits and flowers this week. Oldtimers recall a similar storm on the 8th of June some 25 years ago.

1922: The opening dance of the season at Cuchara Camps will be next Sunday.

1928: Mr. and Mrs. Kato are apparently lovers of the feline tribe, for they have about 50 cats.

1934: Huerfano County today was designated a secondary drought county for Federal relief. Counties on the secondary list are eligible for all the benefits provided those on the emergency list except for relief cattle purchases.

1939: An unusually high wind last Thursday broke off tree branches and damaged crops and other property in La Veta, followed by a cold wave.

1945: Temperatures hovered around freezing last week in La Veta and the less hardy had to dig out their old winter clothing.

1950: J.A. Kenner of Walsenburg won the contract to build the new show barn and sales ring for the Huerfano County Hereford Breeders Association for less than $35,000 just north of the tracks.

1956: Died, Emma Richards, 69. A native of La Veta born in 1886, she and her husband, an employee of the Denver and Rio Grande, moved away though she returned in 1929 after his death and operated a beauty shop and millinery here. Her survivors are her mother Carrie Mauldin, sisters Yeteve Heilman and Hazel Hazard, and brother Olaf Mauldin.

1961: Assurance has been received locally that a project will be completed to pave the remaining four mile stretch of Highway 111 south to Cuchara.

1967: Pearl Kitchen received word of the death of her oldest brother, Morgan Patterson, 99, who was born in Cherokee, Georgia and lived in Huerfano County for many years. 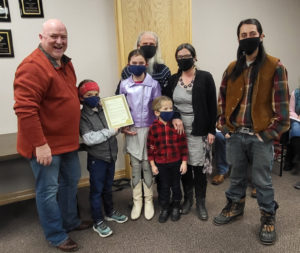 by Billy Donati RATON– In a flurry of activity during their regular meeting on Tuesday, Jan. 24, the Raton City Commission upgraded the Crews Field