In the Shadow of the Spanish Peaks, Sporleder Family Plans for the Future 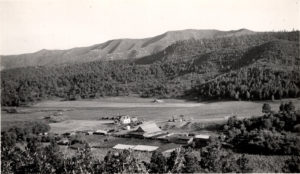 With the completion of the conservation easement, the ranch will continue to be a fixture in the local agricultural economy and maintain increasingly threatened open space in a quickly developing area. The ranch, on the eastern shoulders of the Spanish Peaks supports a haying operation on sub-irrigated hay meadows, and hosts hunters each fall. The family has also launched Spanish Peaks Weddings to host events on the Ranch and draw visitors to the beauty of the region. The ranch, boasts many conservation values, including productive higher elevation agricultural lands, scenic views of the East Spanish Peak, and critical big game habitat. However, it is these same upland parks and meadows that are also prized by second homeowners and drive the conversion of agricultural lands to development and fragmented residential parcels. This threat to agricultural and ecological values has been exacerbated by the current drought, challenging commodity markets, and the COVID pandemic as demand for rural property has driven land values to a point where maintaining agricultural operations has become tenuous. 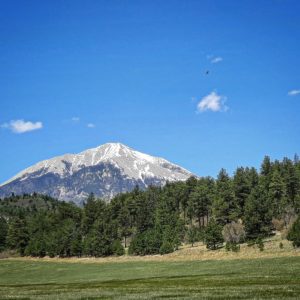 “Through many trials and tribulations over the decades, we are proud to still own a portion of the Sporleder Centennial Ranch. After watching the family and property be split up and divided, Gretchen and I felt it was extremely important to protect the ranch and to ensure it stays pristine, agriculturally productive, and free from development. We’ve worked hard on continuing the legacy of improving this property, habitat, and production,” noted Karl Sporleder. “CCALT aligned with our values and vision, and Brendan Boepple, Director of Additive Conservation, has been easy to work with, making this transaction happen as seamlessly and expediently as possible.”

The Sporleder Ranch consists of two parcels located in the Huerfano and Las Animas Counties, possessing immense conservation value. These parcels are a combination of upland parks and meadows that sustain wildlife throughout the year. The upper parcel, 120 acres, is surrounded on three sides by the San Isabel National Forest and adds to the network of federally, state, and privately protected lands in the vicinity. Both parcels include small streams that are fed from the eastern slopes of the Spanish Peaks. This project protects local agriculture and high quality wildlife habitat, while also supporting a generational ranching operation.

Brendan Boepple, CCALT’s Director of Additive Conservation, highlighted the importance of the Sporleder’s conservation of the ranch: “During a time of increasing development in rural Colorado with agricultural and ecological values threatened, the Sporleders have committed to protecting both the agricultural productivity and natural heritage of the Spanish Peaks region.”

Karl and Gretchen shared that they are immensely “grateful to be able to keep this little piece of heaven intact and be able to pass it to future generations without the land being split again.”

Transaction cost assistance for this donated conservation easement was provided by Keep it Colorado and the Sangre de Cristo Committee of Colorado Parks and Wildlife’s Habitat Partnership Program. A partnership with the Bird Conservancy of the Rockies also supported the creation of due diligence reports.

About Keep it Colorado
KIC is a nonprofit organization dedicated to uniting, elevating and empowering Colorado’s conservation community to protect the lands and waters that define our state.

About Bird Conservancy of the Rockies
Bird Conservancy of the Rockies works to conserve birds and their habitats through an integrated approach of science, education and land stewardship. Envisioning a future where birds are forever abundant, contributing to healthy landscapes and inspiring human curiosity and love of nature. Our work radiates from the Rockies to the Great Plains, Mexico and beyond. These efforts are advanced by sound science, achieved through empowering people, realized through stewardship and sustained through partnerships.