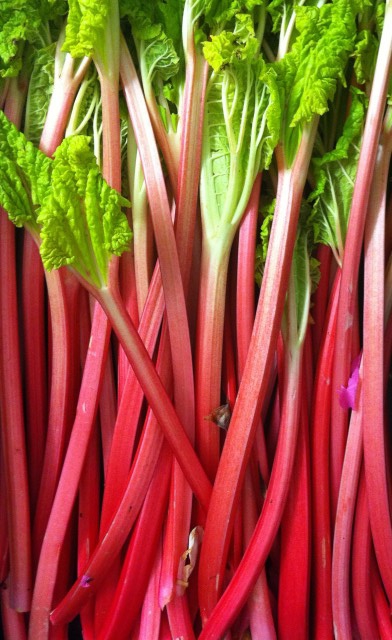 OUT WEST — It’s rhubarb season, and I know you’re all pretty excited about that. Rhubarb doesn’t have it any easier than the rest of us trying to survive in this climate. It’s a little too dry, it gets a little too hot, and soil nutrients are a little too scarce. If you have a rhubarb plant in your garden, it’s probably a hundred years old and you are wondering why someone planted it to begin with. Because, face it, most of the plant is POISONOUS.

I got to thinking, who was the first person to try rhubarb? I mean, you look at the plant and it isn’t something that you would think, “Oh wow! That looks delicious!” Most of it is an unusual color of green. Warning sign number one. And then it’s got those pinkish red stalks, and red in nature generally is a clue that the red thing tastes bad (which is why, by the way, birds around here would rather starve than eat adobe bugs).

The poisoning symptoms, by the way, are a lovely list: weakness, burning in the mouth and throat, death from cardiovascular collapse, difficulty breathing, abdominal pain, nausea, vomiting, diarrhea, convulsions and coma. Here’s the kicker. They have one guy in one corner heaving and another guy in another corner with convulsions, and THEN someone on the testing committee decides, “Oh what the heck Herman, how about you try the stalks and see what they do to you.” And apparently Herman says, “Okay.” Because eating the stalks got the green light.

Well, we cut our rhubarb last week. It was kind of thin and pathetic. Why did I even bother? Because, when I was growing up, even though we weren’t starving, my Mom made rhubarb sauce every spring. It was disgusting. But it’s a family tradition.

Amid storm warnings, road closures, only six of 25 teams make it to Trinidad by David Tesitor TRINIDAD—  While the Trinidad Miners officially won, it