Raton Run Stopped by Ruidoso in 3A Semis 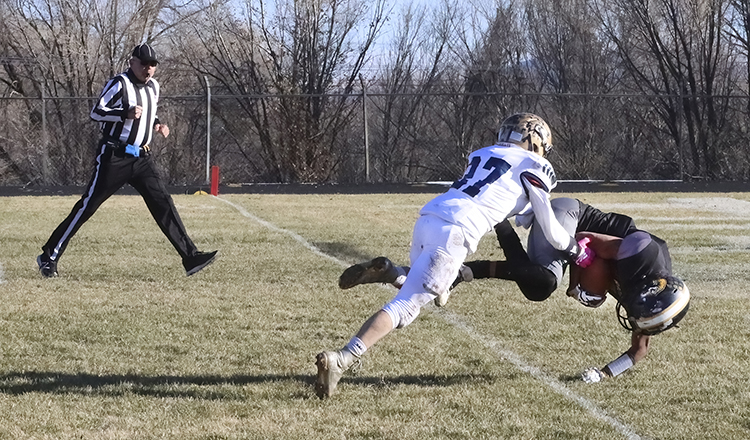 RATON —An entire season can come down to one yard or one extra point and both came into play on Saturday, Nov. 19 as Raton hosted #2 Ruidoso in the NM 3A Semifinals. The Warriors gained the final lead with 3:20 to go and then held the Tigers short on a fourth and one from near midfield to squeak by 21-20 and earn the right to play in the championship game next weekend against St. Mike’s.

Raton was hobbled by injuries on the starting line, but that didn’t stop them from springing Cayden Walton for an apparent 90-yard run from their own six-yard line during the first series.  Raton was flagged for holding and had to punt from their own 10-yard line. On the return, the ball was muffed and Raton’s Isaac Garcia pounced on it, but Raton again was stymied by Ruidoso for a three-and-out.

Ruidoso, stopped at their own 22, attempted a fake punt. But Raton’s Matthew Munoz tracked down Logan Sandoval and Raton took over at the Ruidoso 24. Raton moved down to a first and goal at the six, but a third down tipped pass incompletion brought in Cole Hopper for a 27-yard field goal attempt, which was blocked.

An artic storm brought snow and frigid temps on Friday, but the game was played under blue skies and temps just above freezing. The footing remained slippery for everyone including Walton.  The #1 All-time rusher in NM High School history, Walton had his #4 jersey torn off his pads, so he had to finish the rest of the game wearing #18.
The first quarter ended in a scoreless tie, but the only score in the first half would come early in the second period.  Raton was called for a chop-block on the first play of the quarter, and then on a first and 20, Raton’s Jacob Mattorano launched a perfect throw to Cannon Walton, and with 11:36 left in the half, Raton converted the PAT and led 7-0.

Ruidoso took the second-half kickoff on their own 27 and then went 11 plays with the aid of a recovered fumble by an offensive lineman, and a flag on Raton for an illegal hit out of bounds on a third and long.  Ruidoso had a first and goal on the 6 with Kaden Sago going in for the score and Dalton Trapp getting the 2 point PAT pass and Ruidoso had their first lead 8-7.

The lead was short-lived though as Mario Alvarez gave Raton good field position on the kick-off and then on the first play in the second half for the Raton offense, Walton went 57 yards right up the middle to the Jungle’s north end zone. Hopper’s PAT put Raton back on top 14-8.

Cayden Walton has become a weapon, not only running but throwing the ball, as he controlled a high snap and lofted it to WD Hyer for a 41-yard completion.  But a Raton fumble gave possession to the Warriors at the 27.  Ruidoso got a first down but then with time running down in the third period, fumbled back to Raton as Adrian Romero glommed on the loose ball at the Warrior’s 46.

Raton finished the third quarter attemping a screen pass on 4th and nine from the 34. But then Ruidoso started on a game-tying drive into the fourth quarter with an 11-play effort by Kaden Sago ending in a one yard TD run.  The PAT was turned back by Anderson Weese, Garcia and Hyer, leaving it a 14 all tie with 8:42 left.

The Warriors tried another trick with a quick kick, but Raton’s Chase Middlebrook  gave Raton the ball on the Warrior 45.  A 20-yard gain by Walton, was negated by holding and Raton tried a flea-flicker back to Mattorano, but the ball was dropped and left Raton with a 2nd and 19 at the Ruidoso 41.  Mattorano took the snap, dropped back and then cooly lofted a 41-yard TD to Hyer.  The blocked extra point proved the difference in the scoring as Raton led 20-14 with 7:30 left in the game.

Ruidoso had their game-winning drive start at their own 35, and after 11 plays Sago had his third TD run from five yards out.  A kicked PAT gave Ruidoso a 21 -20 lead with just over three minutes to go.

Raton started with good field position at their own 45, but Ruidoso stopped Raton on two straight short yardage downs and then ran out the clock for a berth in the championship game next week.

Raton ended the season with a 9 and 4 record and the second consecutive appearance in the semifinal game for 3A.
Raton is saying thank you and goodbye to kicker Cole Hopper, lineman Adrian Romero, D end Zach Lose, lineman Derek Day-Pineda, guard/linebacker Anderson Weese; lineman Brian Cervantes; and RB/CB Cayden Walton.