RATON — June 25, 2021 might be a big day for Raton. That day entrepreneur Kayvan Khalatbari closes on his purchase of the town’s only movie theater, the 1930 Spanish medieval-style El Raton. Possession will pass from local owners, the  Kamps and Medinas, to a Trinidad mover and shaker who plans to refurbish the vintage movie house and expand it into an entertainment and music venue.

Who Is Kayvan Khalatbari? 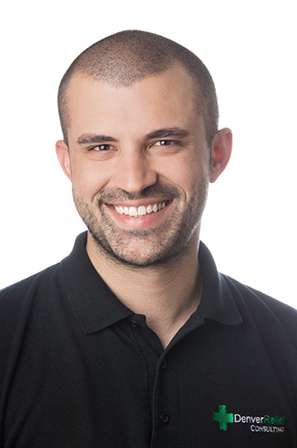 Referred to as a “ganjapreneur” by Denver’s Westword, Khalatbari’s journey reveals a quest to master the contemporary West with a mind bending array of startups that meld seized opportunity with a pitch perfect instinct for the zeitgeist.
Born in Lincoln, Neb. in 1983, the 38-year-old Iranian-American became a Denver player with a comedy club he called “Sexpot Comedy,” a Capitol Hill pizza parlor he transformed into a pizza chain, an alternative arts magazine, “birdy,” a run for mayor of Denver, and advocacy for a range of issues including: universal healthcare; creation of a public bank; construction of tiny house villages for the unhomed; demilitarization of police; and ending the war on drugs.

One of the first to open a medical marijuana dispensary in 2009, he ultimately sold his business interests to Willie Nelson.  Subsequently, he consulted with entities entering the marijuana market.

“He is really talented,” says real estate maven and preservationist Dana Crawford. “We have an allegiance agreement, and any time I can help him, I do,” says the developer best known for saving Denver’s Larimer Square.
Wally Wallace, Trinidad’s Economic Development Coordinator, enumerates projects Khalatbari has invested in during the past year:  restoration of the United Presbyterian Church; purchase of the Danielson Building, poised to open a bookstore venue called “Mutiny Information Café”; the re-opening of the Trinidad Lounge and Hotel offering nightly music and entertainment; the purchase of Elm Street Station, the future home of his fifth “Sexy Pizza” restaurant, plus a brewery and bicycle shop. A former employee of Khalatbari’s, Wallace says, “He is a very good guy to work with.”

Trinidad mayor Phil Rico observes Khalatbari is “very interested in the housing industry, an issue we are struggling with. He’s definitely getting prepared for what is coming to Trinidad.”

Crossing the Pass
Khalatbari is extending his empire across the pass into Raton. On April 13, 2021, the Raton City Commission approved its single received sealed bid for a $700,000 state grant to Ramel Family Farms, LLC to construct a steel greenhouse as part of a farm located on city property in the Armex building. More than a greenhouse supplying fresh produce year-round, Khalatbari foresees the enterprise including opportunities for arts, entertainment and entrepreneurial ventures.  One planned crop is crickets. Not only are millions of crickets sold by the pound a source of  marketable “insect protein,” but their “pfaff” is used as fertilizer. Crickets are a low water-use crop and may be used in pet food. The project will create as many as twenty jobs, he says.

City Manager Scott Berry says he is “very excited” about Ramel Farms, a family operation that includes Khalatbari’s brother and cousin and takes his mother’s maiden name.
Another venture is a proposed farm store located in the Santa Fe Trail Traders building on 2nd St. that, according to realtor Pam Seneff, he  purchased.
Khalatbari says he has associated with a regional distribution network, the Denver-based Co-op, to deliver “higher quality” food by providing an outlet for produce, meat, dairy and more from small farms.

Khalatbari’s Philosophy
Citing his Nebraska roots, Khalatbari relocated to Trinidad because it reminds him of home and evokes community. And, “as Trinidad goes, so does Raton,” he says. Raton’s rich history and border location are among its assets, he says, and although the town may have fallen on some rough times, he empathizes with the plight of rural communities and intends to do something about it.

Operating on what he terms a “shared vision” of capitalism that is less hierarchical, less “extractive,” and more participatory, he wants to offer an alternative to the “Walmart” economy by providing workers with ownership through their jobs. He believes that by “making a leap of faith and taking better care of employees” with health care and other benefits, businesses can be profitable.