Land Board may lease parcels near former Petroglyph wells

by Mark Craddock
HUERFANO COUNTY — The Colorado State Land Board is considering auctioning oil and gas leases on two parcels in northern Huerfano County – at the epicenter of a decades-old environmental debacle precipitated by Petroglyph Energy’s work in and around River Ridge Ranch. 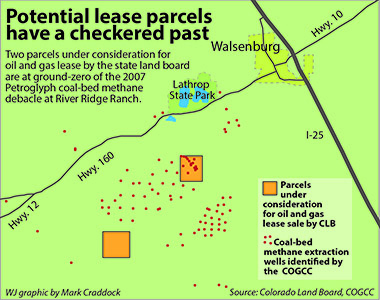 On Nov. 23, Huerfano County Commissioner John Galusha made a motion for the county to draft a letter to the state land board acknowledging “their responsibility to generate revenue for state schools,” but asking them to “consider our history with coal-bed methane development.”

The motion passed unanimously.
Unlike the U.S. Bureau of Land Management, which regularly holds similar mineral lease auctions and actively seeks public comment well in advance of the sales, the Colorado Land Board first conducts an internal review of potential parcels, seeking comment from “subject matter experts” and “local government designees,” which in this case are due this Friday, Dec. 3.
Huerfano County’s government designee is Gardner resident Dale Lyons. She brought the matter before the county commissioners last week and urged them to submit a comment to the land board.
She showed commissioners a map of the two parcels under consideration, then superimposed over it a COGCC map of coal-bed methane wells drilled in the area.

“Previous experience in Huerfano County with coal bed methane extraction has been quite negative,” Lyons told the board. “We would not like to repeat the significant environmental impact that occurred in our county in 2007 and hope the state land board would realize our concern.”

“We would appreciate some assurance that coal-bed methane extraction would not occur on these parcels,” she said.
“For myself,” Commissioner Gerald Cisneros said, “I’d hate to see that River Ridge country go back to the way it was.”

The Way it Was
In 1998, Boise, Idaho, based Petroglyph Energy, Inc. began coal-bed methane operations in Huerfano County, at its peak operating as many as 52 wells south of Hwy. 160 between Walsenburg and La Veta.
In coal-bed methane extraction, wells are drilled into coal seams. The goal is to decrease water pressure in underground aquiferss by pumping water from the wells. This releases methane from the coal, which flows as a gas up the well to the surface. Methane is then compressed and piped to market.

According to World Journal coverage at the time, the company had pumped nearly 200 million barrels of water from the coal beds between 2005 and 2007.

But the unique geography of the region allowed methane to contaminate nearby water wells and the water extraction caused several landowners’ wells to run dry.

In at least one case, a private property owner’s well-pump house reportedly exploded because of a build-up of methane gas.

In 2007, Colorado Oil and Gas Conservation Commission (COGCC) took the rare step of issuing a cease-and-desist order to Petroglyph to shut down its wells in Huerfano County because of “staff’s concerns about protecting public health, safety, and welfare.”

This followed a study by Petroglyph and Norwest Questa Engineering Corporation which recommended resuming extraction operations to better identify possible man-made or natural conduits for the methane migration.
“Based on Questa’s and Petroglyph’s extensive investigations to date, the COGCC staff believes that the conduits for methane migration are most likely the naturally occurring igneous dikes and, perhaps, fractures associated with the dikes and that the potential for plugging these naturally occurring conduits is very low,” the order reads. “As a result, returning the wells to production would continue to result in migration of methane into the Poison Canyon Formation and the water wells completed in it.”

In 2011, Petroglyph settled two lawsuits related to its activities in River Ridge. The company changed its name to III Exploration II LP and, in late 2016, filed for bankruptcy.

During an October, 2011, hearing with the COGCC, River Ridge Ranch property owner Bob Martin echoed the sentiments of many River Ridge Ranch residents, telling the commission his Colorado dream had turned into a nightmare.
“Are we going to be back here five to 10 years from now going through this same process?” he said. “What assurance do we have as homeowners that we aren’t going to get stiffed by another company that is exploring underground and affecting the water we pull out of the ground — that we consume?”

The State Land Board
The Colorado State Land Board was created with the founding of the state in 1876, to manage federal land given to states as an asset to generate funding for public education.

The land board currently owns 2.8 million acres of trust land and 4 million acres of mineral estate in Colorado, which it leases to help fund public schools, according to spokesperson Kristin Kemp.

Since 2008, it has earned some $2 billion for state schools. The board provides the primary funding for Colorado’s Building Excellent Schools Today (BEST) program, which has provided more than 500 grants for construction of new schools.

La Veta School District RE-2 received a roughly $36 million BEST grant in 2019 for construction of its new school, which is nearing completion. And Huerfano School District RE-1 was awarded some $20.8 million earlier this year to begin a new school project in Walsenburg.

Kemp said information on the lease sale will be posted publicly in late December for review by the board at its January meeting. She said members of the public who wish to comment on items posted for board consideration may do so online at https://slb.colorado.gov/contact-us.

All counties in state reviewing precincts following National Census of 2020; County fire restrictions lifted by E.E. Mullens WALSENBURG — The Huerfano County Board of

Fearing a no vote, mayor calls for special meeting in one week by Mark Craddock LA VETA – They were so close Tuesday night, one

RE-1 reviews its complaint policy — none too soon, it would seem