Kim/Branson Girls #2 in Colorado 1A Basketball 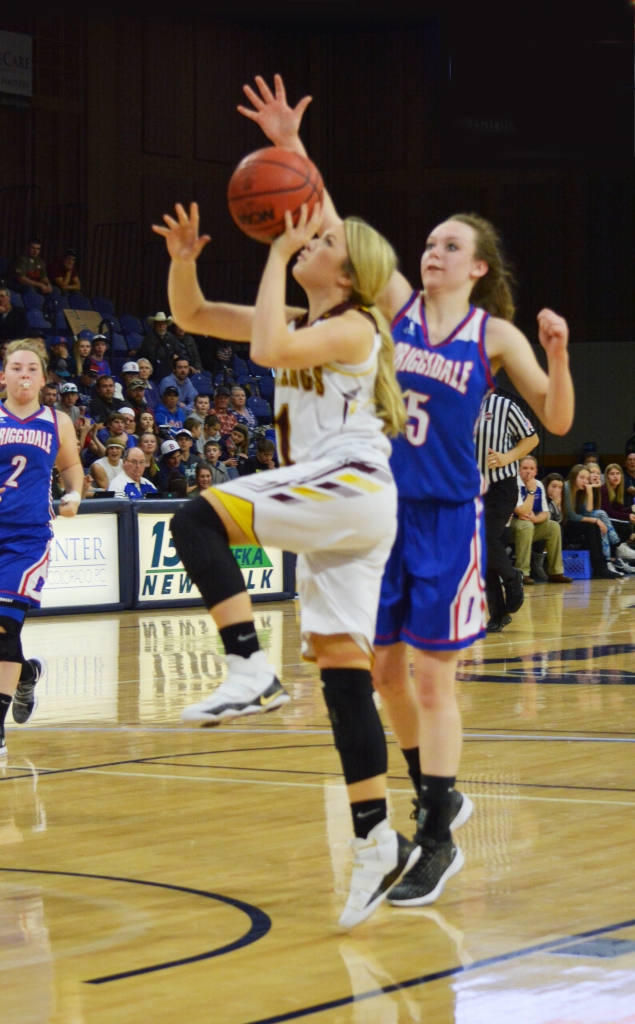 Kim/Branson, #2 seeded, started off the weekend at the 2018 Colorado State basketball Elite 8 with a win over over #7 seed Heritage Christian (20-6) 43-31. A 21-point second quarter gave the Lady Mustangs a lead that they didn’t let go of. The 12-0 run started against the Lady Eagles with a #12 Ashley Yergert jumper, and a #11 Sidney Goode three-pointer. #3 Joni Brown and #23 Talara Nittler also made field-goals during the second quarter run that put the game away.

Senior Zariah Mason scored a team high 10-points and seven rebounds, and had four steals. Freshman Sidney Goode added eight points and game high six steals. Brown, also a senior, chipped in with nine points on four of eight, shooting four assists and four steals. Yergert and Tori Goode had six points each. In the win last Thursday against the Lady Eagles, Kim/Branson was five of seven from the free-throw line. They caused 18 Heritage Christian turnovers while only committing seven team turnovers. The Lady Eagles were 13 of 17 from the free-throw line and shot only 30% from the field. The Lady Mustangs came out ready to go against #6 seed Briggsdale (22-4). Kim/Branson scored 13 points while shutting out the Lady Falcons in the first quarter of the semi-final game. Brown started and ended the quarter nailing shots from way downtown behind the three point line, then hit on another three to start the second quarter. The Lady Falcons finally scored midway through the second quarter. Kim/Branson took a 27-12 lead into the locker room at the half.

The third quarter was a defensive struggle, but Briggsdale caught fire in the fourth quarter. After Kim/Branson’s Mason made a field goal, the Lady Falcons went on a 9-2 run. Late in the semi-final Briggsdale went on a 7-2 run to come back and cut the lead down to just two, 45-43. Torri Goode, Nittler, and Yergert made some key free-throws down the stretch as the Lady Mustangs held on for the 50-46 win to advance to the Class 1A championship game.

Yergert had 13 points and was six for six from the charity stripe, to go along with eight rebounds, and four assists. Brown finished with 12 points, seven boards and four steals. Nittler had 11 points and three steals; and Sidney and Tori Goode combined for 12 points. Kim/Branson had 21 team steals and nine team assists, shot 40% from the field, 10 for 15 from the freethrow line and made six three’s.

The Girls 1A hoops title game was a true David vs. Goliath match-up. Number one seed Kit Carson got out of the gate with a four -zero advantage, then Mason hit a two point field goal and Brown hit a jumper and completed an “and one” three-point play. The score was close the remainder of the first quarter, with Sidney Goode ending the first period scoring with a jumper and Kim/Branson standing toe to toe with the defending 1A girls hoops champs with the score at 9-11.

Kim/Branson started the second quarter on a 5-0 run to take the lead at 14-11 behind two and three point field goals by Sidney Goode and Yergert. Brown then gave the Lady Mustangs a four point 16-12 lead, but Kit Carson went on a 13-0 run to take the lead at 16-25. Tori Goode hit a three just before the half to cut Kit Carson’s lead down to six. Kit Carson started the third with an eight – zero run that Kim/Branson just could not overcome. The Lady Wildcats rolled the rest of the second half on the way to a 39-63 win and their second consecutive 1A Girls state crown.

Kit Carson, who has now won 52 games in a row, were led in scoring by Oliva Isenbart, a junior who scored a game high 25-points and had 13 boards and three steals. Kit Carson’s Tess Hornung added 18 points.

The Lady Mustangs were led by Joni Brown who, in her final game, scored 13 points. Brown, who played in 88 games in her hoops career with Kim/Branson, had 337 rebounds, 182 assists, and 348 steals, and scored over 1,000 points in four varsity years. Fellow senior Ashley Yergert added 10 points in the championship game loss. She also played 88 games in fours seasons with the Lady Mustangs, averaging 12.0 points per game, 7.6 rebounds per game, and 3.2 steals per game. She had 274 assists and blocked 79 shots. Zariah Mason also had a good career in Kim, having played in 81 games in four years where she scored 500 points and had 166 steals and 300 rebounds.