“If you don’t straighten up, you will end up in Springer…”

by Sherry Goodyear
SPRINGER — When Jerry Prather was a kid growing up in Socorro, NM, it was common for him and other boys to be threatened with incarceration at the New Mexico Boy School if they didn’t behave.

Since those days, Prather says he has driven through Springer many times over the years admiring the “Cactus” building which sits prominently on the northwest side of Springer’s main intersection of Maxwell and 4th Street.  Despite any childhood angst Prather might have felt at the mention of the name, “Springer,” he and his wife, Susie purchased the Cactus building in March of 2018 and hired Michael R. Ramirez Construction to begin renovating it in November of that same year. Though the covid pandemic slowed progress of the remodel, the Cactus has been restored to its former glory, and all because of Prather’s vision and love of historical things.
Prather says he had always wanted to live in either an old bar, bank, or fire station, and the Cactus checked off two of those boxes as it was once a bank and a bar. In fact, the two-story brick structure has seen much over its one-hundred-plus years of life. 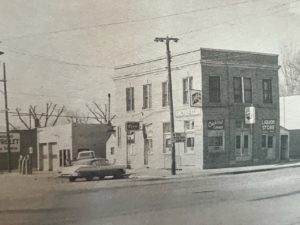 The building was built by Herbert S. Murdoch and his family and is rumored to be one of the famous Rapp Brothers properties built by the Wootton Bricklayers of Raton.  It was the Colfax County State Bank between 1919 and 1926, and later became The Oil Inn (gas station) and Tavern with the upstairs housing Murdoch’s dentist office and Dr. L.A. Thompson’s medical office.  H.S. Murdoch eventually became mayor of Springer, and his daughter, Natalie Murdoch, was the first licensed female dentist in the state of New Mexico. The gas station part of the building was run by Charles N. Ford (C.N. for short).

Later on, Francis Matthews owned the building and named it the Cactus Club, and he and his wife and daughter lived upstairs.  At some point, a bar built in 1905 by Brunswick Balke Collander Co. – “The Princess” model – (rumored to have been from Dawson, NM which went defunct between 1950-51) was moved into the Cactus.  This ornate piece of furniture has experienced its own illustrious history residing first in the Cactus building, but at some point, being sold and relocated to the Springer House Bar. Eventually, the Springer House became Simple Simon’s Pizza and during this time, the owner rented the bar to a movie company where it was temporarily relocated to Galisteo, NM, and appeared in the western movie, Appaloosa, starring Viggo Mortensen and Ed Harris (released 2008).

Ultimately, the bar was confiscated by the bank when the restaurant went into foreclosure, and it went into storage until Prather was able to negotiate with the bank and buy it in January of this year.  Robert Urquijo of Springer reassembled the 20 or so pieces of the bar.

To say the Cactus has experienced a facelift since the Prathers purchased it is an understatement.  Though the outside transformation is remarkable with new windows, a new roof, repaired brick, etc., Prather says the inside, “is like a brand-new house in the guts of a one-hundred-year-old building.”  Everything is new from the plumbing, electrical system, insulation, sheetrock, and inside staircase (the previous staircase was external and will be removed this summer and replaced with a deck), and all the work was done by local contractors.  Prather stuck to the original footprint but is the man behind the design elements including the new tin ceiling and sparkling chandelier in the barroom.

Over the years, the Cactus was owned by many people who saw its potential and wanted to renovate it, so by the time Prather purchased it, it had been stripped down to the studs, there were holes in the floor, and the place was unlivable.  In the upstairs, broken windows and holes in the rafters allowed any number of wild birds to seek shelter, and Prather says they removed no less than 500 pounds of bat guano. Despite the deplorable state the building was in, Prather had the vision to completely restore it and improve it beyond what anyone could have imagined. 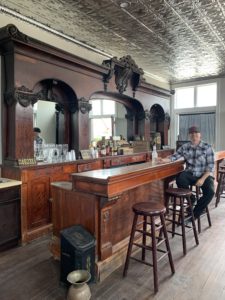 At the open house Prather and a few others held on Friday, April 15, he and his wife were shocked at the number of people who poured into the Cactus for refreshments and a look at one of the most famous buildings in town.  He estimates roughly 300 people meandered through the building, and even though he and his wife had only planned on being open from 4-6 p.m., they ended up staying open until 10 p.m., enthralled by the many stories they heard about the Cactus being a place where couples met, bands performed, and people came to have fun. The Prathers were so thrilled by the turnout, they plan on periodically opening the doors of the Cactus so people can come and share drinks and stories in a community gathering place.

Jerry Prather sees Springer as a town of opportunity and believes it is just two or three businesses away from being completely changed.  Prather himself seems to have a mission of restoring old, hopeless buildings and recently purchased the gas station behind the Cactus, planning to repurpose it into a small guest house.  Additionally, Prather is mesmerized by Springer’s history and is slowly compiling bits and pieces of its illustrious and somewhat forgotten past.

Maybe “ending up in Springer” isn’t so bad, after all.