The need was great for coal miners; the first laborers came from Mexico. Then the English, Scots, and the Welsh came, followed by many other nationalities.

Recruiting agents were waiting at Ellis Island for bewildered travelers wondering what they would do, where would they live, what work was there? The agents appeared helpful – some of them targeted incoming Austrians, while others appealed to the Italians.

Pamphlets with pictures of mountains, the railroads, and the towns out west were distributed. There was no mention about smelters and coal mines, grasshoppers, or winter blizzards. Some experienced coal miners stopped first in Pennsylvania, but heard wages were better further out west and moved on.

The newcomers knew they had to work long enough to pay back the railroad fare, about $30, for travel in a box car for three days. The workers were delivered to temporary railway stops, such as Ideal, Ludlow, or Walsenburg.

The mules were ready for work, the bosses were ready, and the newcomers had no choice in these little towns but to take a job in the mine. Working underground was not natural to them, many were farmers who enjoyed the outdoor challenges.

Underground workers had to depend on one another for safety; all nationalities were alike down there and all were covered in coal dust. But, they survived.

Immigrants yearned to have some land here. They heard about homesteading, if one intended to become a citizen, so they filed petitions for naturalization. Their land gave them a place of refuge during strikes when they had to leave the mine.

With little understanding that what happened elsewhere affected jobs locally, they did not understand how a railroad strike in the East could cut the demand for coal. Their jobs could be cut. They may have been forced to move, but they found ways to survive with the bit of land they had and a few animals.

Then World War I began. Foreign miners were forced to make a decision – to return to the home country to serve in the military, or to remain in the United States and be eligible for the draft. They again survived.

Angelo Mosco’s family story follows the oft repeated model for those of the time. A Walsenburg attorney for 59 years, he came to the United States from Italy when he was only four months old. His family moved from coal camp to coal camp, wherever there was work. Education was a way to go beyond just surviving, so Mosco graduated from the University of Colorado with a law degree. As Walsenburg city attorney, in private practice, as deputy district attorney in Pueblo, and as Huerfano County ‘s attorney, he was able to marry and raise a son and four stepchildren. He had two brothers, two sisters, seven grandchildren, and nine great-grandchildren when he died in 1985. His grandchildren would not know the struggles the previous generations made to survive. 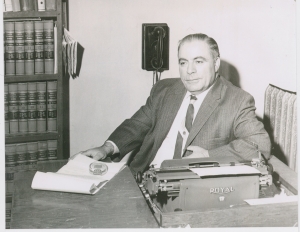 Photo of Angelo Mosco from the Tirey Local History Center, Walsenburg, through the courtesy of the A.R. Mitchell Museum, Sehon collection, Trinidad. Information is from an article written by Dr. Joseph Velikonja, professor of geography at the University of Washington. His research locally was through the Plaza de Los Leones organization, which had a grant from the Colorado Humanities Program. The History Detective is a service of the Huerfano County Historical Society. huerfanohistory.org carlynewmn@aol.com 719-738-2840.