Eating Your Way to a Happy New Year: Welcome the Year with Black-Eyed Peas 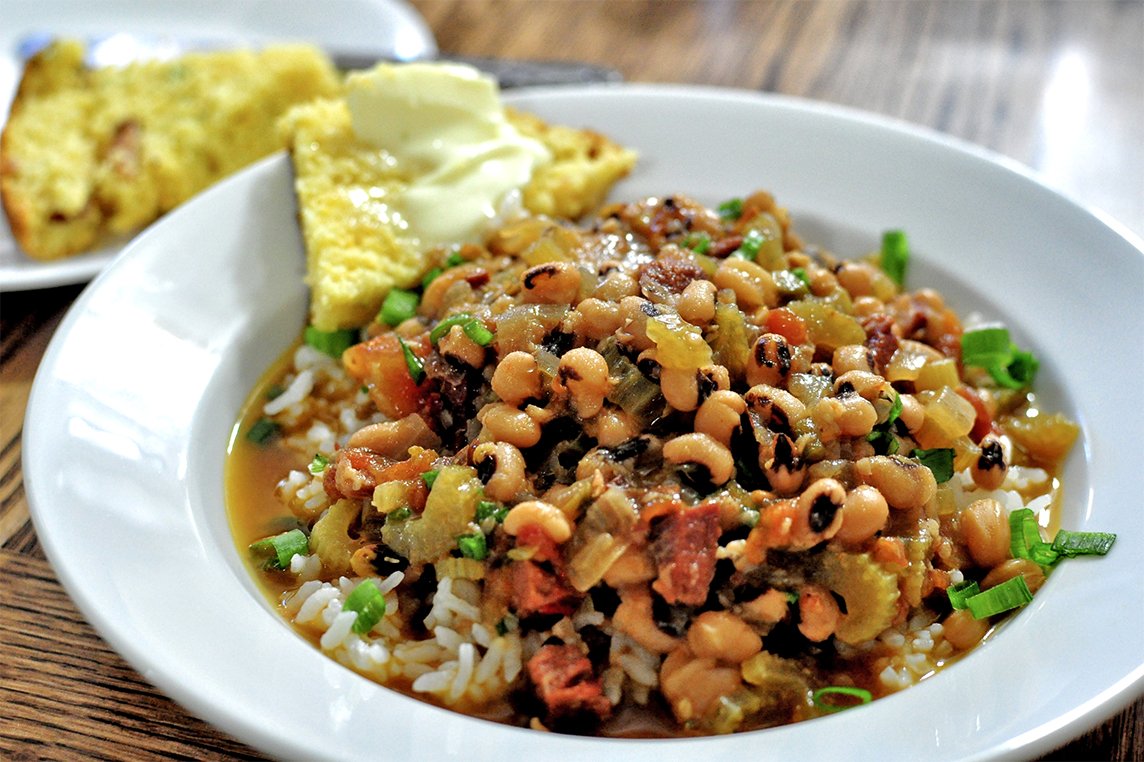 by Sharon Niederman
Eating black-eyed peas at the New Year has become a tradition to ensure a prosperous year ahead.  Whether you prefer a bowl of plain beans stewed with ham hocks or just a bit of olive oil, or to dress them up in a stew known as “hoppin’ john,” the key is to ingest them as the year begins. Hot vinegar or Tabasco on the side is a must. They are also one way to soothe the previous night’s over-indulgence.

Originally a Southern custom with African American roots, the black-eyed pea, also known as the cow pea, traveled north during the Great Migration, when, post Civil War, approximately six million Black people moved from the American South to Northern, Midwestern, and Western states roughly from the 1910s until the 1970s.

But how did this humble, earthy-flavored legume attain its mythic status as a guarantee of health and happiness?

Black-eyed peas were domesticated in West Africa and carried to the South and the Caribbean in the era of slavery, from the 1700s on.

Dried legumes were looked down on as poor man’s food, fit for animal feed, but they were surely appreciated during General William T. Sherman’s march of the Union Army to the sea. Southerners considered themselves lucky to be left with some supplies to help them survive the winter, and black-eyed peas evolved into a representation of good luck.

The planting of crops of black-eyed peas was promoted by George Washington Carver because, as a legume, it adds nitrogen to the soil and has high nutritional value.

Each element of the traditional New Year’s stew is culturally significant, including the peas, since they swell when cooked, symbolizing prosperity; the greens symbolize money; the pork, because pigs root forward when foraging, represents positive motion. Cornbread, which represents gold, also often accompanies this meal. While the dish is prepared traditionally with ham hocks or other pieces of pork, cooking them simply with olive oil is becoming a more popular method so all guests and family, including vegetarians and vegans, may enjoy it.

Black-eyed peas may of  course be cooked from scratch, but it is also possible to find them already cooked, canned and frozen.

Black-eyed peas from scratch
Take a one pound bag of black-eyed peas and rinse them well. Put them in a pot and cover them with ample water. Let soak overnight. In the morning, drain, rinse, and put them in a pot with water at least two inches above the beans. Quarter a sweet onion and char the pieces over a gas flame. Add to the peas. Add any ham hocks, bacon, salt pork or other meat you prefer. Add a bay leaf. Bring to a boil, then lower flame and simmer for at least two hours, or until tender, skimming as foam rises. Serve with hot sauce and stewed collard greens if you like. Alternatively, cook them in a crock pot on high for about four hours, adding liquid as necessary.

Hoppin’ John
Some say an old, hobbled man called hoppin’ John became known for selling peas and rice on the streets of Charleston. Others say slave children hopped around the table in anticipation of the dish.

Here is the classic recipe from Southern Living magazine.

Cook bacon in a Dutch oven over medium-high, stirring occasionally, until starting to crisp, about 10 minutes.

Add broth and black-eyed peas, and bring to a boil over medium-high. Reduce heat to medium-low, and simmer until peas are tender, about 40 minutes.

Heat oil in a medium saucepan over medium-high. Add rice and cook, stirring often, until fragrant and lightly toasted, 3 to 4 minutes. Stir in 3 cups of the reserved cooking liquid and remaining 1⁄2 teaspoon salt. Bring to a boil, and reduce heat to medium-low; cover and cook until rice is tender, 15 to 18 minutes.

Fluff rice with a fork, and gently stir into pea mixture in Dutch oven.
Stir in the remaining cooking liquid, ¼ cup at a time, until desired consistency is reached. Sprinkle each serving with sliced fresh scallions.

Good luck and a happy and healthy New Year!