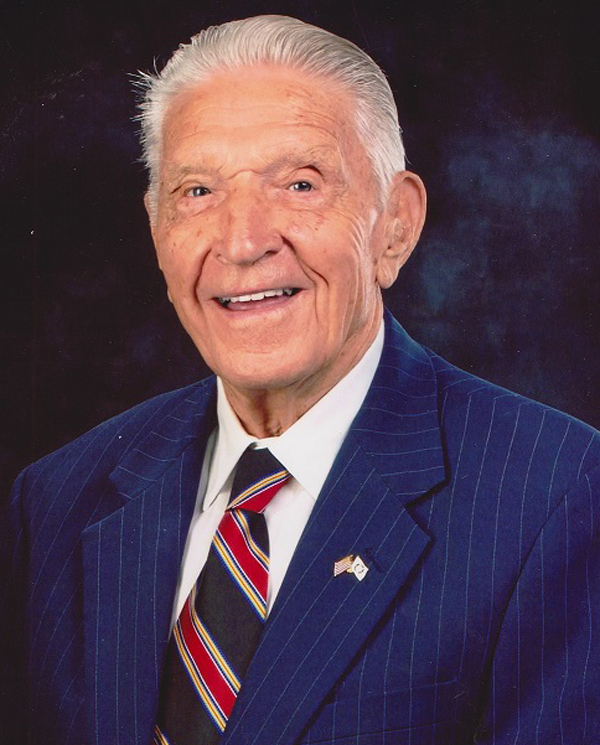 Danny graduated from Raton High School in 1942. He proudly fought for his country in WWII, while serving in the U.S. Navy as a Motor Machinist on the USS Alcyone AKA-7, a transport combat ship that was active in both the European and Pacific theaters, under the commander of Admiral Halsey during the war. Danny was awarded eight Bronze Star medals of bravery and honor.

After the war, Danny returned to Raton and was employed 30 years with Raton Public Service Company as Chief Engineer. He held many offices with the BPOE Elks Lodge and was a member of the VFW. Danny loved all sports; he was an official High School Baseball umpire. He was an avid outdoorsman, hunting and fishing. Danny loved music and, above all, dancing.  He was “Dancing Dan.”

Danny served as a Lay Minister at St. Patrick’s Catholic Church for over 30 years. He loved people and life and always had a smile and was ready to help.

Danny was preceded in death by his wife, Pauline; his parents, John and Teresa Tibljas; and brothers John and Jim, and sister Mary.

He is survived by his daughter, Nancy Foxen, of Chandler, AZ whom he joined in Arizona when he moved to Bella Vista Senior Living in 2014; son, Gary Tibljas; three grandchildren, three great-grandchildren; a sister, Josephine Phillipich, 96, of Raton, NM; nieces and nephews.

Recitation of the most holy rosary will be Tuesday June 21, 2016 at 9:30 am at the St. Patrick’s / St. Joseph’s Catholic Church, recited by Frank Cimino Jr. Mass of the Resurrection will follow at 10am with Father William Woytavich as the celebrant. Inurnment will follow at the Fairmont Cemetery with military honors provided by the Colfax County Young Marines.

Arrangements and celebration of love for Danny Tibljas are under the direction of the Yaksich-Long Funeral Home of Raton.

Several simultaneous fires break out along train tracks in Walsenburg

What to do with a district larger than New York?

School shifts to remote learning until Sept. 24 by Mark Craddock OUR WORLD — New COVID-19 cases among its students has forced Walsenburg’s John Mall