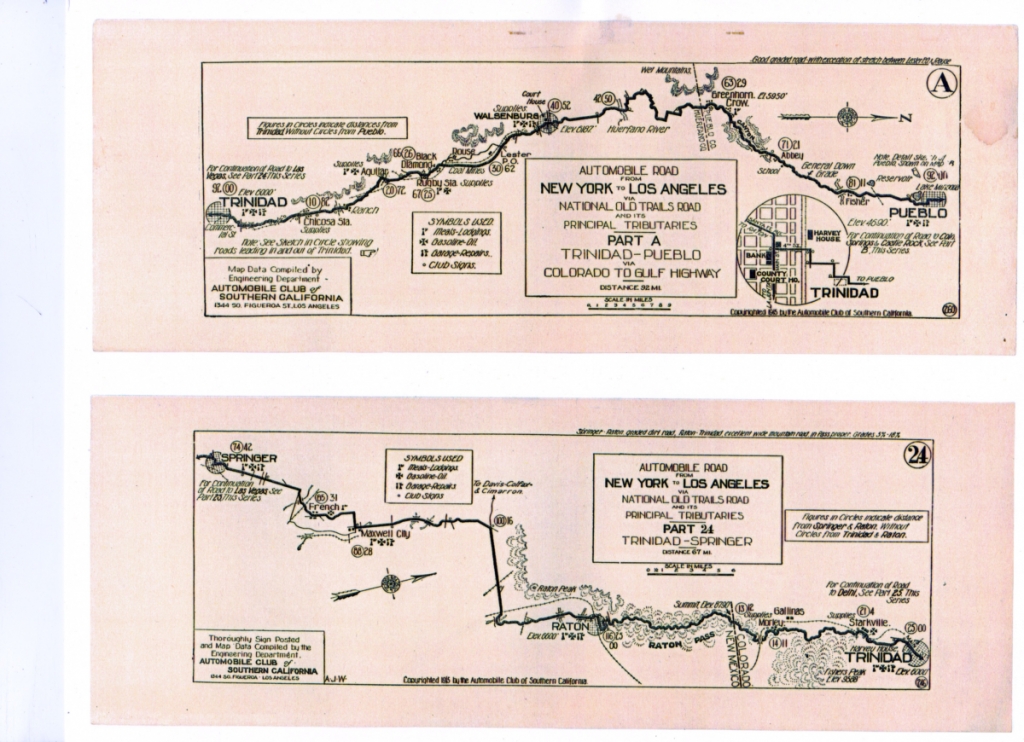 DENVER, CO TO GALVESTON, TX — The August 1, 1918 issue of Motor Age published what are known as the collected works of Sir Humphry Davy concerning early 20th century travel-related activities. In it we find: “Colorado Springs, Col, Jul 26 -Official alignment of the Colorado-to-Gulf highway covering the entire 1195 miles from Denver to Galveston has been completed, and definite plans have been made to mark the route thoroughly. Extensive road improvements also are pledged for many sections of the highway.”

Among the officers elected at that meeting were vice president for the Mountains Division, Mayor Charles E Thomas, Colorado Springs and the vice presidents for Colorado, F. P. Wood, Trinidad, Colorado, and for New Mexico, C. G. Granville, Clayton.

“Clayton, N. M., was decide upon for the 1919 conventions, while Gulf and Mountain Division meetings will be held in August and some time in the fall this year at Hilsboro and Trinidad.” Also reported was that construction work backed by a recent county bond issue resulted in extensive improvement work in Colorado as outlined by the secretary of the Colorado Springs Chamber of Commerce.

Of Colorado’s 227 miles of this highway, he reported 75% were now graded and graveled, with permanent concrete bridges and culverts, and with a surface permitting comfortable travel in all kinds of weather. Davy also mentioned improvements in progress all along the remaining 25% and laid special emphasis upon the entire stretch of road running the entire length of Pueblo county. He also pointed out the importance of Trinidad, Walsenburg, Pueblo, Colorado Springs, and Denver as “gateways to vast scenic treasures to the Rockies, where thousands of motorists gain needed recreation every year and store up strength and efficiency for future work.”

It was reported that New Mexico had 113 miles of the route and Texas, 650 miles and an announcement was made that “[a] new log book in attractive and convenient form has been ordered for early in 1919.”

Strip maps, like the one of Trinidad, CO to Springer, NM shown above, were the precursor to the well-known gasoline station maps popular during the middle of the last century. Automobile clubs like the Southern California would put together a series of cards with detailed driving instructions on them and then provide them to their members who were traveling on well-established roads. If you got off the beaten track, you were left to your own wits, wiles and a well-prepared survival kit.

Many strip maps were more similar to the technologies provided by GPS technologies. The WJ June 2 issue published the map of the road between Pueblo and Trinidad, which also provided topographic information and road conditions such as ‘gentle downgrade’ or information on where supplies and which ones would be available in various towns as well as major buildings such as Trinidad’s Harvey House (Cardenas Hotel) adjacent to the A T & SF railroad station.