Candelario sentenced to life plus 18 months

Candelario sentenced to life plus 18 months 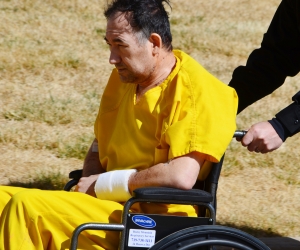 WALSENBURG — Third Judicial District Court Judge Claude Appel sentenced convicted wife killer Ralph Candelario to life in prison without the possibility of parole, and to 18-months on his class six felony conviction of tampering with evidence to run concurrent to the life sentence in a brief proceeding Wednesday, March 16 in the district courtroom in Walsenburg.

Approximately 50 people, including members of the press, attorneys, spectators, family members and others filled most of the public seating in the district courtroom in Walsenburg. The sentencing hearing, which was postponed for 24 hours following a feeble suicide attempt by Candelario at the Huerfano County Jail about one hour prior to the original sentencing date of 4 pm March 15th, saw both prosecuting attorneys, Matthew Durkin and Ryan Brackley, the defendant, and victim Pamela Candelario’s eldest daughter, Shannon Palmer, address the court.

Palmer told the court, over the past two years, things happened she’d like to share with her mother, but no longer can. She said she is reminded of her mom whenever she looks at her sister, Kelsie, who resembles her so much. “She never envisioned she’d have a life without her daughters in it, and we never pictured our lives without her,” Palmer told the court. “We’ve mourned her death, and now we have to mourn our future; it is our responsibility to carry on her goals,” she said.

Palmer also expressed her and her family’s extreme gratitude to those individuals who “told our mom’s story”.

Kelsie Palmer, sobbing quietly in the courtroom gallery did not address the court. She and her sister were, like every day of the trial, surrounded by family members, friends and supporters.

Ryan Brackley told the court, “We got to know, somewhat, the life of Pam Candelario, a woman who had hope for the future, that hope and that future did not include the defendant.”

“We don’t have a lot to say about this defendant,” Matthew Durkin said to the court, “Today he faces sentencing for the brutal murder he committed. The court has heard from Shannon Palmer and the Palmer family he destroyed. The defendant has destroyed the lives of his two young sons and he tried to destroy the lives of two young men who he tried to blame for his crimes.”

Candelario, clothed in a yellow Huerfano County Jail jump suit, looked disheveled as he slowly walked into court escorted by Sheriff Bruce Newman and his deputies. His hair was uncombed, a thick bandaged on his left wrist, and, not surprising, unshaved. Now convicted, the defendant addressed the court, “I’ve maintained I’m innocent throughout this whole process, from beginning to end, and I still maintain this. A friend told me we have a legal system, not a justice system.”  Candelario then told the court he would be filing an appeal of his conviction.

“Mr. Candelario, speech or no speech, we have a criminal justice system, and the rule of law allows everyone their day in court,” Judge Appel said. Calling the murder of Pamela Candelario reprehensible, brutal and deliberate, Judge Appel spoke of the defendant’s willingness to deceive everyone, from law enforcement to his family and the community in general.

You are sentenced to the department of corrections to life without the possibility of parole and 18-months concurrent on count two, the judge told him. Then, looking the defendant squarely in the eye, Judge Appel ended the proceeding saying, “You are remanded to the custody of the sheriff immediately. Take him out.”