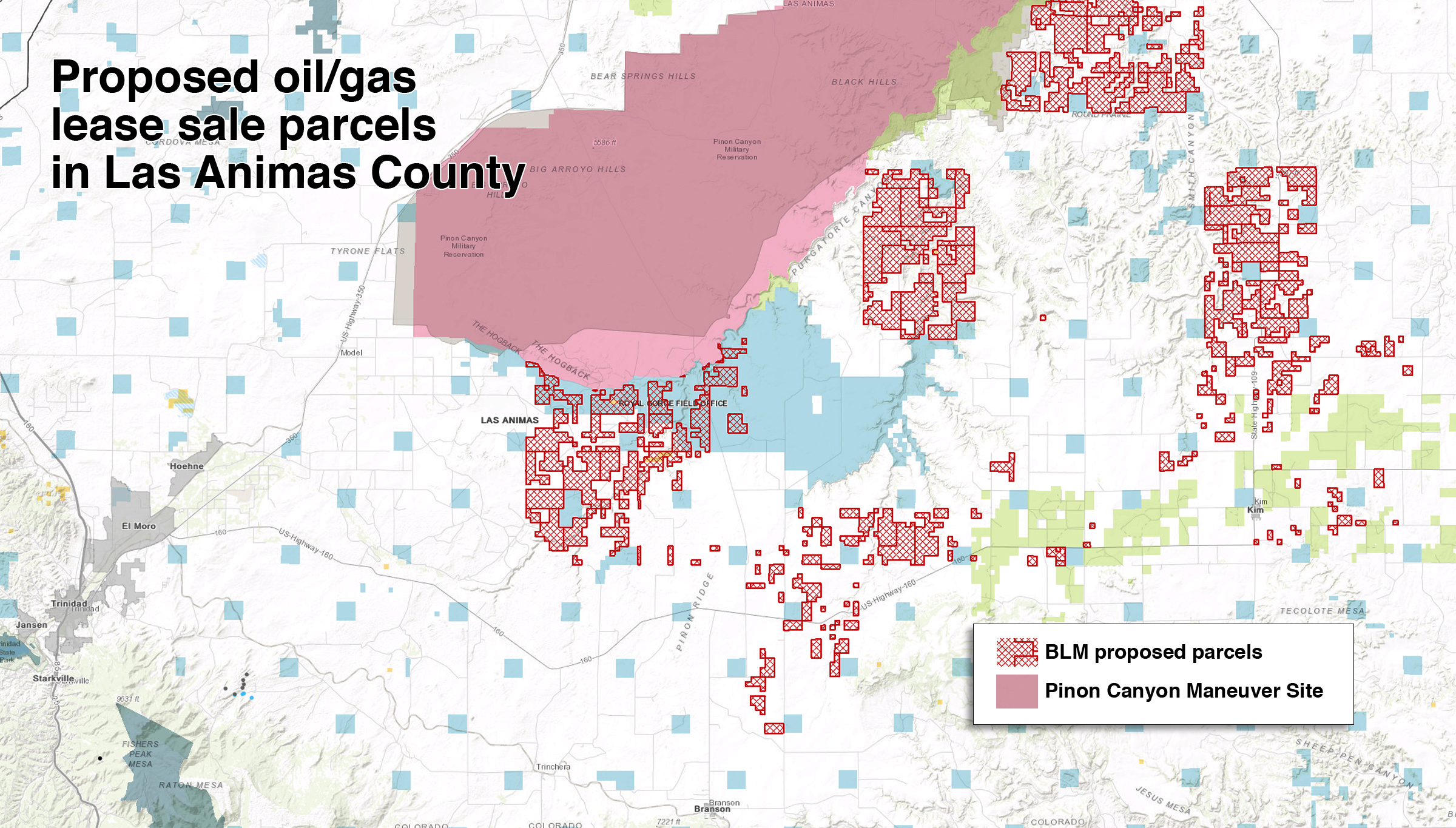 LAS ANIMAS COUNTY — Oil and gas leases on more than 110,323 acres of Bureau of Land Management land in Las Animas County are scheduled to be on the auction block early next year, after a Louisiana federal judge stopped an executive order by President Joe Biden which aimed to pause such sales nationwide.
The land represents 85 parcels in eastern Las Animas County, primarily south and east of the U.S. Army’s Pinon Canyon Maneuver Site.

Another 119 parcels representing just over 31,351 acres in Rio Blanco and Moffatt counties will also be part of that sale.

The “public scoping,” soliciting public comments on the proposed sale, began Aug. 31 and closed Oct. 1. BLM officials will now sift through the public comments before issuing final notification of the sale later this year.
The the don’t-blink-or-you’ll-miss-it nature of the sale corresponds to a June 15 federal district court order, part of a lawsuit demanding an end to the Biden administration’s “pause” on oil and gas lease sales pending a review into their climate-change impacts.

The sale encompasses competitive auctions originally scheduled for January and March of 2021, according to a BLM spokesperson. Those sales were put on hold by Biden’s Jan. 27, 2021 executive order implementing a “pause” on all new oil and gas leases on public lands or offshore waters, in order to perform a comprehensive review of the climate-change impact of such sales.

But on March 24, 2021, Louisiana and 12 other states filed suit against Biden and several executive-branch agencies, saying the executive order was unconstitutional and violated the Administrative Procedures Act, the Outer Continental Shelf Lands Act and the Mineral leasing Act.

A week later, the plaintiffs filed a motion for a preliminary injunction, to stop Biden’s “pause” until the case was heard in federal district court.

On June 15, U.S. District Judge Terry A. Doughty issued an injunction, which the Biden administration has appealed on Aug. 16.

In early August, the plaintiffs filed a motion to compel compliance with the injunction, arguing that the administration was not moving forward with lease sales, in violation of the court’s order.
In its response, the Interior Department said it had expended “considerable resources toward onshore leasing activities.”

“That work has put Interior on track to publicly announce both onshore and offshore leasing activity by August 31,” the response reads.

That date corresponds to the beginning of the public scoping period on the Las Animas County lease sale.
In an Aug. 24 press release, the Interior Department announced steps to comply with the district court’s injunction and said it would also undertake “a programmatic analysis to address what changes in the Department’s programs may be necessary to meet the President’s targets of cutting greenhouse gas emissions in half by 2030 and achieving net zero greenhouse gas emissions by 2050.”

On Aug. 31, Bureau of Ocean Energy Management issued a “record of decision” regarding an offshore oil lease, and the BLM began to seek input on parcels proposed for potential oil and gas leasing – including the Las Animas County parcels.

A motion by the government to dismiss the suit was denied Sept. 22, meaning that, for now, both the lawsuit and the lease sales will move forward.

A review of the list of proposed Las Animas County parcels shows that all have stipulations to protect raptor habitat, water impoundments and streams, and riparian/wetland vegetation. In addition are stipulations to protect cultural resources and to alert lessee of “potential habitat for threatened, endangered, candidate, or other special status plant or animal.”

Public comments on the proposed lease sale were not available from BLM as of World Journal press time Wednesday.