1864: Cerán St. Vrain has leased the Bo Boyce ranch on the Huerfano River to Pedro Gomez. The land is bound on the east by the U.S. Post or Santa Fe road. Gomez must cultivate and give St. Vrain one half of his crop, and St. Vrain must provide the animals and farming equipment.
1889: Juan de la Cruz Pineda and Catarina Rodriguez, both of Walsenburg, were married on the 2nd.
1894: The three men who were accused of stealing two pairs of pants from the Unfug Brothers store dug their way out of the jail and escaped.
1899: A.B. Babbitt, the former carpenter at Maitland, is now assisting Contractor J.B. Gittings in the construction of the new Baxter and Kearns grocery store.
1904: Fred Owens was killed when some blasting caps in his pocket exploded in the boardinghouse at Maitland, three miles northwest of Walsenburg. 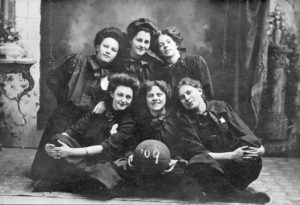 1909: There will be two basketball games in the Armory hall February 19 between the boys and girls teams of Alamosa and Walsenburg.
1914: Advertisement -. Grosseria Italiana. Damestici Gener Importat. G. Brunelli and N. Berasi. South Main Street.
1919: With the end of war shortages, the U.S. Food Administration has ceased to exist and government control over the rationing of food supplies and consumption will end.
1924: Twenty cases of measles were reported in November in Huerfano County, 10 scarlet fever cases, four diphtheria, three typhoid, and two of chicken pox. A rabies case has just been discovered at Turkey Ridge.
1929: Died, Judge Joseph H. Patterson, born in 1853 in Scotland. As a young man, he went to Pennsylvania to mine coal, and moved on to Walsenburg in 1897. He leaves daughters Mrs. William Caddell, Mrs. Robert Caddell, Mrs. J.G. Matthews and Mrs. Julius F. Goemmer, and sons Alex and Joseph, all of Huerfano County.
1934: Seventy-eight fighters in 11 classes will appear in the four night boxing tournament in St. Mary Auditorium.
1939: Seventy jobless mothers without husbands and with broods of growing children are starving since the Works Progress Administration’s sewing room in Walsenburg was closed.
1944: Leon P. Hazel, former manager of the World-Independent, has been reported missing in action in the Pacific where he has been serving with the Navy as a radar operator on a submarine.
1949: The Washington School Wildcats last night were on the weak end of the scoreboard, when La Veta took the local furbearers 17 to 15 in a basketball encounter in La Veta.
1954: Huerfano is again included among the 16 counties designated as drought disaster areas in southeast Colorado.
1959: A pioneer town is to be built in Walsenburg as an attraction for tourists by a corporation composed of Oscar Santi, John Shosky, Star Caywood, Floyd Murr, John Dinise, Floyd Jeter and Paul Krier.
1964: A three day snowstorm stranded many travelers in Walsenburg and closed schools in Gardner, Turkey Ridge, Apache and Bear Creek.
1969: Richard Bush, Gary Demuth and Larry Garbiso of Walsenburg High School have been selected to play with the Western State College Honor Band.
1974: Celebrating their 50th wedding anniversary were Apolonio West and his wife, the former Lucy Frances Garcia, married February 9, 1924 in Wagon Mound, New Mexico. Their seven children include Lilly Trujillo, Corie Vigil, Ernestine Griego and Lloyd, all of Walsenburg.
1979: John Mall High School wrestlers Ray Hernandez, Jimmy Vigil, Max Rodriguez and Phillip Miranda will compete in the state wrestling meet in Denver.
1984: Seniors receiving a straight A average at Walsenburg High School are Shawn Krier, Jeff Martinez, David Scarafiotti, Tina Vialpando and Chuck Vigil.
1989: The City of Walsenburg has received 40 applications for the City Parks maintenance person job.
1994: The Sheriff’s Department processed 792 prisoners during 1993, including 716 males and 76 females, who consumed 18,125 meals prepared by the Huerfano Medical Center.

1883: J.G. Krueger was elected chairman of the committee seeking to obtain title from Judge Daigre for the land being used as a graveyard adjacent to town.
1893: A well loaded train of props came in Saturday night from the Ireland brothers timber camp on Abeyta Pass.
1898: R.A. Hayes, W.B. Brice and Albert Sager have opened a new camp, called Hayesville, in Hayes Gulch on the West Spanish Peak near Spruce Gulch. They say there are “evidences of very old placer work” there.
1903: The other day a young lady was compelled to make a half circle completely off the sidewalk into the street to get around a cow, contentedly chewing her cud and standing clear across the walk.
1908: William Vandevanter has transformed the billiard hall into a first class restaurant, the Palace, and hired a chef from Pueblo.
1913: Mr. Andrews is selling his well known hot tamales and chilli [sic] in the new lunch counter opposite the post office in the Turner building.
1918: Advertisement – You want land and have the money. We know the land and want money. Let’s get together. A.A. Foote, Land Attorney and Surveyor, La Veta.
1923: William Snedden died at the home of his son at Ravenwood. He was 69 and a resident since he came from Scotland 40 years ago. A miner, he married Isabelle Topping in 1884. She survives along with eight of their 12 children.
1928: A novel and rare occurrence nowadays took place Saturday when a snowball hit one of Ed McClure’s horses and the team ran away.
1933: An old time blizzard visited La Veta this week with six to eight inches of snow, 30 to 32 degrees below zero temperatures and heavy winds which piled huge drifts in the roads.
1938: The second year Typing Class is working the problems of the modern business office which include the making of telegrams, invoices and legal and carbon forms.
1943: John Elley, longtime local taxidermist, has a nice collection of mounted animal heads on display at Warren Farrar’s Village Blacksmith and Machine Shop.
1948: An 18-hour windstorm closed roads to travel for 24 hours due to the packed snow. The Chief Theater was dark Tuesday night because Mr. Wilson could not go get the film due to impassable roads and Rotary Club had about 50 percent of its usual attendance.
1953: Unemployment in Huerfano County increased approximately 21.4 percent in January from December because of the lack of construction and reduction of crews at two local coal mines.
1958: La Veta won two more victories over the weekend, downing Hooper 47-39 and Moffat, 116-52, led by the high scoring Lloyd Snedden who made a record breaking 65 points against Moffat.
1963: La Veta received about two feet of snow over the weekend and Cuchara 30 inches, bringing the water supply to about 70 percent of normal.
1968: Donna Disert, a senior at LVHS, has received the honor of being a “Betty Crocker Home Maker of Tomorrow”.
1973: Juniors on the first semester honor roll are Steve Aguirre, Kurt Bradley, Lane Drury, Shirlee Engleman, Rodney Falk, Jon Keeling, Nola Long, Karen Quintana, Beth Pene, Janice Riggins, Jill Schwarz and Robert Thompson.
1978: Ted Sanchez, son of Mr. and Mrs. Henry Sanchez and a LVHS sophomore, brought home the high school’s first ever District Wrestling crown from the District 5 meet February 4 in Westcliffe.
1983: Town Clerk Elsie Cannon has resigned and Town Board is accepting applications for the job. The 24-hour per week position pays $529 per month.
1988: There will be a Sweetheart Dinner of shrimp for $7.50 in the Baker Creek Tavern Saturday evening February 13. A dance will follow with music by Mixed Company. Next month Baker Creek will have a melodrama staged by the Spoon River Players.
1993: More than 100 people donated for the benefit of Cajun Al Mix during his illness by attending a potluck dinner and dance in the La Veta Sports Pub and Grub.