by Nancy Christofferson
HUERFANO — Somehow, sometime, Thanksgiving became so synonymous with turkey dinners that nowadays the holiday is liable to be called Turkey Day.

Back in the 1930s and ’40s, this popularity of the big bird was only good news to Huerfanos. At a time when jobs were scarce and money scarcer, turkeys meant employment and a paycheck.

Turkey raising was a no-brainer for early farmers. The birds were almost as good as a flock of guinea hens for early warning devices, when the flock began screeching at a lurking coyote or fox. Turkeys also  liked to eat grasshoppers and could even kill rattlesnakes. What’s not to like during grasshopper plagues or droughts when animals closed in on hen houses or other animal enclosures for an easy meal?

As early as 1905 Huerfano raisers were delivering birds to Walsenburg meat markets in November for the Thanksgiving rush. That year we see Lew Read bringing in a wagon load from the Santa Clara, and George Caldwell bringing 40 all the way from Gardner. These were “on the hoof”, as it were.
These holiday treats used to cost a lot more than they do today, per pound, but on the other hand, they were smaller. In 1921 J.S. Hunter sold 76 to a meat dealer for $353.14, or about $4 each. These were probably live birds and would require much work before hitting the dinner table.

In 1930 turkeys were selling for 23 to 25 cents per pound live weight. Three years later the price had been depressed to 11 cents “on foot” or 15 cents dressed. The newspaper noted this was “Good for the consumer but not much profit for the raiser.”

As a response to this, raisers organized a co-op.  In November 1932, a four-county “turkey pool” was organized in an effort to guarantee better prices by reaching new markets. The counties were Huerfano, Fremont, Pueblo and El Paso. Their first shipment included the output of 85 raisers who shared the $8,700 realized.

Even though this was only about $100 per grower, $100 was more than they’d gotten previously. And turkeys of the day seldom received special feed or care beyond shelter and available water and insects, so there was no great investment in the crop.

More bang for the bird
One of the most vocal of the growers was William Bennett Crump, usually known as W.B. or Bill.  Bill was an organizer, and he was also pragmatic about turkey raising. That first season with the co-op, some 1,000 turkeys were prepared and shipped out of Huerfano County, many of them his.
Those first birds were apparently processed in the Sporleder warehouse. The very first shipment, by rail, was in December 1935, and was termed an “experimental enterprise”. The railroad car left Walsenburg  bearing 1,245 birds from the county. The following year pickers and packers produced 1,500 turkeys for the Christmas market. And in 1937, some 16 tons of meat were processed in three days by a crew of 20, of which 3,000 birds were sent to market before Christmas. The shipment for 1938 was valued at $12,000 which for the time was a hefty chunk of money.
In 1939, when the Loma Park Dairy moved out of town, the turkey processing moved into the now-vacant barns. That year, Crump said abut 3,000 birds would be produced, a sizable increase, but the idea was catching on. Mrs. Stanley Costelny of Rouse, for instance, had a flock of 2,000.

Meat’s back on the menu
All these domesticated turkeys in no way halted the hunting of the wild variety. Nature did that, or over-hunting, but from around 1900 there was no season for killing turkeys because they were practically extinct in this area. Not until 1949 was a season on turkey reinstated.

Another way of obtaining these fowl was attending the ever-popular Turkey Shoot, an organized event, often a charitable fundraiser, but one in which the best shots might take home three or four birds, and the unlucky shooter had none.

The unfortunate ones probably joined one of the annual “hunts”, in which anything edible was flushed out to be shot. Rabbits were often the chosen prey, though the rattlesnake population often suffered as a byproduct. Surely no one ate them? Rabbits were edible, and early cookbooks gave a variety of preparations, including the Southern recipe for rabbit and cream casserole. Rabbit hunts were often held in the ’30s to provide the needy with meat on the holiday table.

In 1940 the birds were processed in the old dairy and shipped from the Sporleder docks. Some 2,000 were sent out to New York markets.
In 1942 Crump had 1800 turkeys at his “unique plant” in La Veta – whatever that means. That year, some 5,000 birds had been shipped for Thanksgiving, with Mrs. Kostelny providing 363. only 10 raisers remained in the co-op.

Processing pure profit
The processing plant usually shipped three times a year, in late October for Thanksgiving, mid to late November for Christmas, and one after Christmas for the general market.

Each “run” required about six days. By the mid-’30s, the employment service was sending applicants to the plant, where some 100 people worked at a time. In October 1936, they processed 30 tons, or 3,000 birds, for an $18,000 crop. The workers were each paid per bird, but together could produce some 5,000 pounds per each day. In 1942, processors received 10 cents for each hen picked clean, or 13 cents for toms. Believe it or not, but this extra employment was an economic boost to the county, as noted by employment officials.

In 1945 the Spanish Peaks Turkey Association (aka turkey marketing association) organized with Charles Corsentino, president, Carl Rahn of Gardner, vice president and Crump, secretary and treasurer. There were 12 members. Not only was the organization now paying lower prices for poults (which usually arrived in March), they were negotiating better profits for themselves. By 1946, they were producing 96.32 percent Grade A birds, and they shipped out an impressive 332,548 pounds of them.

A new processing plant was built that year, in one of the larger buildings at the county fairgrounds. It was modern, bright and clean, with better conditions and larger, more efficient refrigerator capabilities than old barns. In fact, the refrigerator was said to be 20 by 50 FEET by nine feet tall. Capacity was said to be 2,000 turkeys. Up  to 80 workers could work during the season. It officially opened Monday, December 7, 1945.
That year, Carl Elley of La Veta was top producer with 1,500 birds weighing an average of 20.96 pounds. Raisers could expect to earn about 35 cents per bird by this time. Of course, Elley one year lost about a third of his flock of half-grown turkeys in a hail storm so he deserved the trophy. It was not uncommon either for entire flocks to be killed in early snowstorms.

Crump in 1946 was elected vice president of the Colorado Turkey Growers Federation, said to be a million dollar industry. The Huerfano County Chamber of Commerce honored him for his contributions to the economy.

The empire comes crashing down
The fourth and final run for 1952 included processing 3,000 birds, which were shipped out around December 10. It was indeed the final shipment, forever.

Exactly what caused the demise of the local turkey industry is unknown. Possibly the employment picture as the ’50s brought more job opportunities and higher salaries. That last season, the plant was weekly running ads for more pickers, as in having 15,000 birds to process, and we “need 100 more employees immediately”. Apparently people showed up, for 100 were employed for five days in early November. There was no 1953 season.
The plant was abandoned, with all its fancy machinery.

Turkey processing is not a glamorous job by any means, but where we be today if the potato raisers had taken the forefront, and now we had Potato Day? Great, a feast featuring mashed potatoes and fries. Filling, to be sure, but a tad bit on the high cholesterol scale. 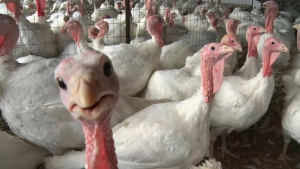 Somehow, Butterball has managed to survive without our input.